Is there an optimum human population on this planet?

When I was growing up in the 1970’s, people were concerned about overpopulation, what the earth’s “carrying capacity” was, and where we were in relation to that capacity. It seems that the dire predictions of the times did not come true, and the world population has now (May 2016) roughly doubled since 1970. 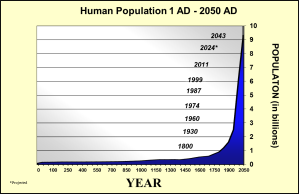 Estimates vary, but the current population is around 7.4 billion people, and many scientists think the earth’s carrying capacity is between 9 and 10 billion people. At the current rate of population increase (83M/yr) we will exceed 9 billion in 19 years; But the birthrate is thought to be declining, and taking that into account, it is predicted to happen in 22 years (2038). This is a mere blink of an eye in evolutionary terms and within the lifetime of many who are alive now.

Carrying capacity is an interesting concept, and seems to imply that the planet’s sole purpose for existence is to provide resources for humans. I think that there is another concept we would do well to develop: At what human population level could we live sustainably with the planet and it’s other life forms?  What is the Maximum Optimal Human Population (MOHP)? I will make the possibly outrageous assumption that MOHP is greater than zero.

How would we know that we have exceeded the earth’s MOHP and are heading toward the planets carrying capacity? I submit a partial list here based only on my own intuition and observations. It seems that all of these are at least partially true today:

Within human societies as the paradigm of continuous growth falters I would expect to see:

I’m sure the above is an incomplete list, and I would welcome additional items especially from those with exposure outside of the United States who can give an international perspective. Do you think we have exceeded the MOHP and what do you think a good estimate is of the value?

This entry was posted in Humanity. Bookmark the permalink.